Tennant & Davies Interview About The End of Their Run

Below is an outstanding video interview with David Tennant and Russell T. Davies, the outgoing star and executive producer of Doctor Who.  This was produced for Boing Boing and the interviewer is Richard Metzger.  Well worth your time.

Doctor Who Takes the Cake

Wow!  I’ve seen those competitive cake baking shows on the Food Network, but I never thought I’d see Doctor Who cakes!  Well… except my own Groom’s cake. Here are a few, but click here to visit the Cake Wrecks post full of Doctor Who themed cakes. 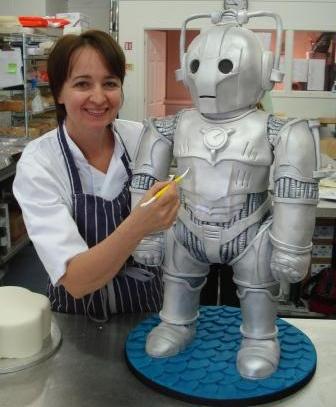 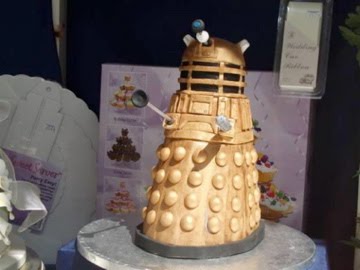 The TARDIS Console Room Gets a Facelift

A few weeks ago I mentioned that Matt Smith’s TARDIS looked brand new from the outside.  I even speculated whether the inside might have been updated.  Well, rumor is the inside will be different when Matt Smith takes over.  From io9 (and they got it from a Gallifrey Base poster):

A poster at Gallifrey Base claims to have gotten a good look inside the new TARDIS set, which we’ll see in 2010. Supposedly, the interior of the TARDIS will have two different levels, joined by a spiral staircase, and we’ll be seeing a console room, a lab area, a sitting room, a long corridor, and “numerous other little nooks and crannies.” The set is designed to be modular, so that pieces of the set can be moved around and double as other parts of the ship, when we visit other rooms inside the TARDIS.

The console room itself is a shaped like a hexagon attached to a square rather than being circular, the color theme is mostly silver and gold, and the coral finish has been replaced with marble. The roundels decorating the walls are now inverted hemispheres, and while they appear throughout the set, they do not appear on every wall. The roundels have different color schemes for each room: gold in the console room, silver, gray, and blue in the lab, and brown in the sitting room.

You should, of course, take this with several truckloads of grains of salt.

Last week io9 ran a listing of what they consider to be the Top 100 Science Fiction/Fantasy Shows of all time.  Doctor Who came in at #2 (just behind Star Trek).  They described it as, “One of the most iconic shows on television – period – let alone science fiction TV”.  That’s pretty cool!  Additionally, while reading through the list I discovered that Terry Nation (the creator of the Daleks) worked on MacGyver!!!  Turns out that Nation was a producer on MacGyver for six episodes.  Doctor Who & MacGyver – two great tastes that taste great together!!!

My thanks to Ed for directing me to most of this information.