X-Men the Animated Series is one of the more beloved cartoons to come out of the 1990s.  This series ran on Fox from 1992-1997 for five seasons with a total of 76 episodes. Last week volumes 3 and 4 were released on DVD by Buena Vista Home Entertainment (no doubt in order to capitalize on the same-date released X-Men Origins: Wolverine).  It’s sort of ironic when you think about Buena Vista releasing these cartoons in light of Disney’s recent purchase of Marvel Comics.  It’s a small world afterall (pun intended).  I would have reviewed volumes 3 & 4 before now, but there is simply so much content on these DVDs that I’ve been busy watching them.  Seriously, there is over 11 hours of X-Men across these two collections! 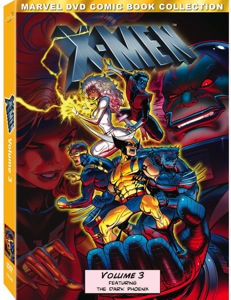 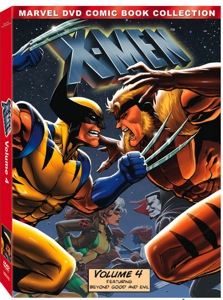 X-Men the Animated Series volumes 1 & 2 came out this past April.  To read my review of those volumes, please click here.  This time out, volumes 3 & 4 cover episodes from the third and fourth season of the show.  Volume 3 contains 15 episodes, including: an adaptation of “The Dark Phoenix Saga”; an exploration of Wolverine’s past in the Weapon X project; and an alternate timeline in which the X-Men never existed due to the murder of Professor Xavier.  Volume 4 contains 14 episodes, including: Magneto’s offer of sanctuary to all mutants aboard his Asteroid M fortress; and Apocalypse’s daring plan to kidnap all telepaths using Cable’s time platform.

I used to be a major X-Men junkie. We’re talking MAJOR junkie. I’d read every single Uncanny X-Men story from Giant-Sized X-Men #1 (1975) through Uncanny X-Men #320 (January 1995), and all the various franchise books. Shortly after the “Phalanx Covenant”, I’d had enough and just walked away from 20 years of continuity and over 400 comics.  So I was really surprised when the storyline in these cartoons truly grabbed me.  Essentially these are adaptations of Chris Claremont’s best work.  While these cartoons aren’t perfect, they did a much better job adapting “The Dark Phoenix Saga” than did the film X-Men: The Last Stand.

As with the previous volumes, these cartoons provide solid entertainment.  There is tons of action, subplots, and drama.  I’ve said it before, but the creators definitely deserve props for not reinventing the X-Men for this cartoon. They pulled plots directly from the old comics, instead of trying to “re-imagine” the X-Universe.  It’s evident that the storytelling in volumes 3 & 4 has improved as compared to the previous releases.  The writers have brought a little more maturity to the adventures.  The stories focus quite a bit on character development and the discrimination against Mutants.

Some of the stand-out episodes on these releases include:

Now you gotta take the good with the bad.  Like the previous releases, these DVDs don’t have any special features. I found myself disappointed once again, but wasn’t terribly surprised.  You’d think they could score some kind of commentary, interviews with Marvel staffers, or at least trailers for the episodes.  Oh well.  Also, the animation continues to be less than stellar.  While it wasn’t terrible, it certainly pales in comparison to series contemporary, Batman: The Animated Series.

Those concerns aside, I’d definitely recommend these discs to folks.  It truly is one of the best comic book-adapted cartoons of all time.  These DVDs are available through Amazon.com – click here for Volume 3 and click here for Volume 4.  However, if you aren’t already familiar with the X-Men cartoon, you should first check out volumes 1 & 2.  You can watch the first 21 episodes of X-Men the Animated Series on-demand for free at Marvel.com.