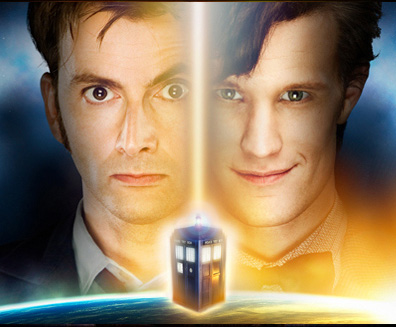 Let’s face it, we’ve all had them before… New Doctor Jitters.  I don’t think there has ever been a name given to this condition, but now we have a label for it – New Doctor Jitters.  When the Doctor regenerates, we find ourselves skeptical after seeing those first few moments featuring the new actor.  It’s only natural.  We’re wrapped up in our emotions as we say goodbye to an actor we’ve come to accept as the Doctor, and then in the middle of that emotional turmoil his replacement appears.  It’s so jarring to switch from a sad departure to a grand entrance.  It’s difficult to accept someone new while we’re still reeling from the departure of the previous actor.

I remember my reaction when Tom Baker regenerated at the end of Logopolis.  After transforming from Tom Baker into Peter Davison, the new Doctor sat up and the episode ended.  That’s all we got until the first episode of Castrovalva.  It didn’t matter.  In those few seconds of screen time I had already decided that I hated Peter Davison as the Doctor.  I couldn’t stand him.  There was no way I was ever going to accept this new guy as the Doctor.  Forget it.  No way.  No how.  … Well, that opinion changed after seeing Castrovalva.  I eventually realized I didn’t have an issue with Peter Davison, I was just unhappy that Tom Baker was leaving and wasn’t ready for some new actor to take over.  In fact, Peter Davison quickly became my favorite Doctor and remained so until David Tennant came along.   It just goes to show that it’s not fair to judge a new Doctor on his first appearance.  9 times out of 10 we end up loving each and every Doctor after just a few episodes (sorry Colin, but you’re brilliant in the Big Finish audio adventures).

I think it’s reasonable to be nervous or skeptical.  However, some people have already passed judgment on Matt Smith.  They’ve decided they don’t like him based upon what they’ve seen so far.  They say his hair is too crazy.  He’s too young.  His chin is huge and his eyes are sunken.  He uses his hands too much.  If we actually had a TARDIS, we could go back in time four years and hear those same people talk about David Tennant after The Parting of the Ways but before The Christmas Invasion.  They said his hair was too crazy.  He was too young.  He was too pale and thin.  He was too geeky to be a hero.  Sounds kinda familiar doesn’t it?  Gotta admit, Tennant’s first few lines didn’t exactly fill us with confidence. “Hello.  Okay… New teeth. That’s weird.  So where was I?  Oh that’s right, Barcelona!”  Those lines were no indication of how amazing he was going to be as the Doctor.  As another example, just imagine being a Doctor Who fan in 1974 after getting your first glimpse of Tom Baker in costume.  The scarf, the big smiling teeth, googley eyes, and crazy hair. Those fans were probably convinced Tom Baker was going to be terrible.  So again, it’s not fair to judge a new Doctor before he’s had a chance to really play the part. Who knows, maybe Matt Smith will be the best Doctor ever!

I watched The End of Time Part Two with my ten-year-old step son.  When the credits started to roll, he turned to me and said excitedly, “This new Doctor is going to be fun!”  I think my step-son’s got the right attitude.

Sure I’ve got New Doctor Jitters, but I’m also eager for the next season to begin.  I’m ready to jump in with both feet.  Geronimo!

If you can’t see the embedded video above, please click here.