When I was growing up, there was a golden rule generally accepted by comic book readers.  The rule was that Jean Grey could come back to life as often as Marvel wanted, but there were four characters that should forever remain dead.  They were: Bucky Barnes, Flash (Barry Allen), Robin (Jason Todd), and Captain Marvel (Mar-Vell).  Each died in a dramatic way that had a lasting impact on comic readers.  Well… here we are in 2010 reading comics about Captain America (Bucky Barnes), Flash (Barry Allen), and Red Hood (Jason Todd).  The only one that has remained deceased is Mar-Vell.  For those thinking he came back during Civil War/Secret Invasion, that turned out to be a very convincing Skrull.  So let’s all give a tip of the hat and a heartfelt THANK YOU to Captain Marvel for staying dead.  Thanks, Mar-Vell!

Mar-Vell’s death in 1982 was written by Jim Starlin and appeared in the very first “graphic novel” Marvel published, The Death of Captain Marvel.  As this was slightly before I was reading comics regularly, I missed out on all of Captain Marvel’s adventures.  I’ve read the occasional back issue that featured appearances by Mar-Vell, such as Marvel Team-up, but never read a comic with him in the lead role.  Therefore I didn’t really have any understanding of the character.  I knew he was revered by many fans, but I always wondered if that was simply because he died or because his comics were great.

I also followed Mar-Vell’s son, Genis-Vell, in Avengers Forever, the early issues of Peter David’s Captain Marvel run, and the New Thunderbolts.  I really liked the character and thought it was an interesting take on a legacy hero (no pun intended).  I hope to go back and get the rest of David’s run someday.  Reading about Mar-Vell’s son also contributed to my curiosity about Mar-Vell himself.

Enough wondering already!  I recently decided to find out for myself what Mar-Vell was all about.  Why was he so loved?  What was his personality?  Why did he switch from the green & white costume to the blue & red costume?  I picked up the Essential Captain Marvel volume I which reprints his first appearance in Marvel Super-Heroes #12-13 (1967-68), as well as Captain Marvel #1-21 (1968-70).  This 512 page tome contains stories by comic legends such as: Stan Lee, Roy Thomas, Archie Goodwin, Gene Colan, Dick Ayers, Don Heck, Gil Kane, John Buscema, and more!

I’m not going to recap each individual issue for you here, you can surf the net for that.  Instead I’ll provide some of my thoughts and musings on these comics.  Probably the most noteworthy thing about this collection is the ADHD nature of them.  It seems every few issues the direction of the series changed completely and without warning. 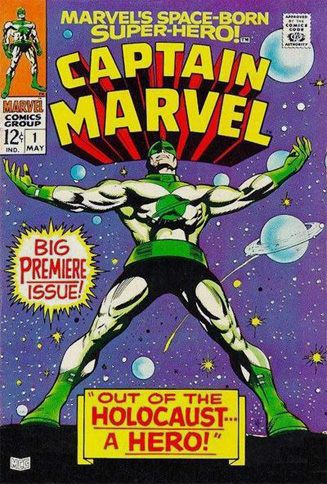 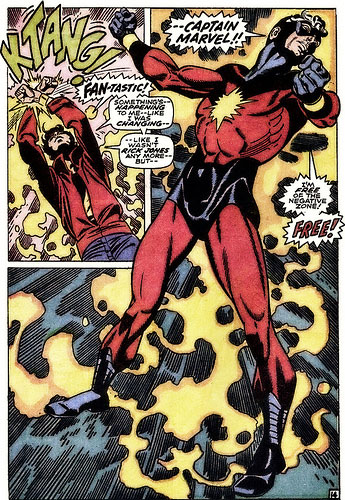 Mar-Vell was an interesting guy.  His background was different from many other Silver Age Marvel characters.  If you look at characters like Peter Parker, Steve Rogers, and Ben Grimm, they all came from humble beginnings; whereas Captain Marvel was an established war hero in the Kree military.  When we first met him, he was already a man of action and notoriety.  Like other Marvel characters, he experienced dramatic emotions, endured angst-ridden plots, and dealt with dysfunctional characters.  In the early issues, he was torn between his responsibilities to the Kree and his growing respect for the people of Earth.  In later issues he was more of the straightforward superhero.  His relationship with Rick Jones provided some nice interplay, almost like a “buddy movie”.  It’s interesting to note that in some ways the transformation between Rick Jones and Mar-Vell echoed the other Captain Marvel – transforming between Billy Batson and Captain Marvel (a.k.a. Shazam).  Y’know, maybe one of the reasons I liked the Mar-Vell/Rick Jones incarnation so much is the similarities to Firestorm.  Both characters were the fusion of two people, one of which was an angsty teenager, and they communicated telepathically.  Hmmm…

I’ve always had a gut feeling that Marvel Comics wanted Captain Marvel to be one of their top-tier characters.  Stay with me for a moment on this.  First, his name implies a deep connection to the Marvel universe.  If you run a company called Marvel Comics and you name a character Captain Marvel, I’d expect you to have big plans for him.  Second, in some ways he was Marvel’s version of Superman.  He was an alien from another world with fantastic powers helping the people of Earth.  While Superman was an orphan, Mar-Vell stood alone in his opposition to the Kree plans for Earth.  If his series had been more successful, I wonder if he would have became one of Marvel’s icons.

Overall this is not a fantastic collection, however, the first six and final five issues make it worth your time and money.  By the end of this run the character is settled into his Mar-Vell/Rick Jones incarnation.  I’d be very interested in reading an Essential Captain Marvel volume II just to follow the adventures of this incarnation.  There was a trade paperback printed a few years ago entitled, The Life And Death Of Captain Marvel, which included issues 25-34 and The Death of Captain Marvel story.  I may just track down a copy so I can read more on this version of the character.

In conclusion, thanks again to Mar-Vell for staying dead these past 28 years.  You’re the last great superhero to remain beyond this mortal coil.  Keep up the great work … or more precisely, the lack there of.