Read This Too – Franklin Richards: Son of a Genius

Comics are fun!  Typically when we talk comics here, we’re discussing mainstream superhero titles such as Justice League of America, Aquaman, Flash, or The Avengers.  Today ONCE UPON A GEEK is participating in a loosely-themed crossover with 17 other blogs entitled, “Read This Too!”  The basic idea is for each blogger involved to recommend a comic they enjoy but don’t typically write about.  Since we’re always discussing regular superhero comics here, I’ve decided to tackle a “funny book” for this crossover event.  Thanks to our buddy Kelson from Speed Force for spearheading this interesting and horizon-expanding crossover!

Today we’ll be talking about the Eisner and Harvey Award nominated series, Franklin Richards: Son of a Genius! This series of one-shots features Franklin Richards, son of Fantastic Four’s Mr. Fantastic and Invisible Woman.   These out-of-continuity adventures follow the hilarious antics of Franklin, a precocious and adventurous little boy who can’t resist playing with his father’s brilliant inventions, typically with disastrous results.  Franklin’s constant companion is H.E.R.B.I.E., the robot nanny who attempts to keep Franklin in line. 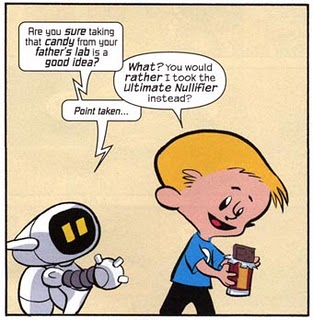 What makes these comic strips so brilliant is they are patterned after Calvin and Hobbes! Franklin’s trouble-making behavior is reminiscent of Calvin’s, while H.E.R.B.I.E. plays Hobbes’ role as the voice of reason.  Reed and Sue Richards mirror Calvin’s parents, while there is even an occasional Susie Derkins analog in Katie Power (from Power Pack).  One difference between Calvin and Franklin is that Franklin actually has access to the unearthly scientific inventions that Calvin could only imagine.  The artist used an adorable cartoonish style to emulate the Calvin and Hobbes look and also incorporated more realistic imagery for creatures like dinosaurs (similar to what Bill Watterson did in Calvin and Hobbes).

There were 15 one-shots published in the Franklin Richards: Son of a Genius series between 2005 and 2009. Each issue was self-contained and typically contained several five-page amusing stories.   The majority of stories were developed by Chris Eliopoulos and Marc Sumerak.  Sumerak performed script duties on most issues while Eliopoulos drew and lettered the books.  Franklin Richards: Son of a Genius began as a series of back-up strips appearing in various Marvel comics. The strips were well-received by Marvel readers and the concept was granted a self-titled one-shot, which reprinted the previously published strips. Subsequent one-shots in the series consisted of new material. These one-shots have been collected in digest and trade paperback form.

Here is the description from Marvel Comics for the Franklin Richards: Son of a Genius series:

Move over, Mr. Fantastic – Marvel’s First Family has a brand-new star! Franklin Richards finally hits the big time with this collection of four of his critically acclaimed one-shots! Join Franklin and his robot pal H.E.R.B.I.E. as they head into Reed’s lab for all kinds of fantastic fun, amazing adventures and more trouble than you can shake an Ultimate Nullifier at! This compilation is bound to bring out the kid in every reader!

So if you’re looking for a laugh, check out these digests!  If your local comic book store doesn’t have them in-stock, ask them to special order them for you!  You won’t regret it!

Interested in reading more good comics? Great! Check out the lesser-known titles reviewed in these other blogs and “Read These Too!”:

Please feel free to give a shout-out to any lesser-known comics that you love in the comments!

13 thoughts on “Read This Too – Franklin Richards: Son of a Genius”