Welcome back for the third day of Mayfairstivus, the nine day celebration of Mayfair Games’ DC Heroes Role-Playing Game! Today we’ll be looking at the 1989 character card for Doctor Fate!

If you are new to ONCE UPON A GEEK, then you may not know that I’m a tremendous Doctor Fate fan!  He’s one of my all-time favorite superheroes!  Therefore, I wasn’t going to miss this chance to feature the role-playing stats for the “Ankh-Bolt Adventurer”! ….  (yes, i just made up that nickname.  i have to say it’s brilliant and you should all start calling him that.  do this.)

The first two editions of Mayfair’s DC Heroes Role-playing Game came with collections of character cards which included statistics.  Doctor Fate wasn’t lucky enough to merit a character card in the first edition, but by the release of the second edition in 1989 he was headlining his own monthly comic.  Below you’ll find the Doctor Fate character card (front and back) included in the 1989 edition of the DC Heroes RPG. 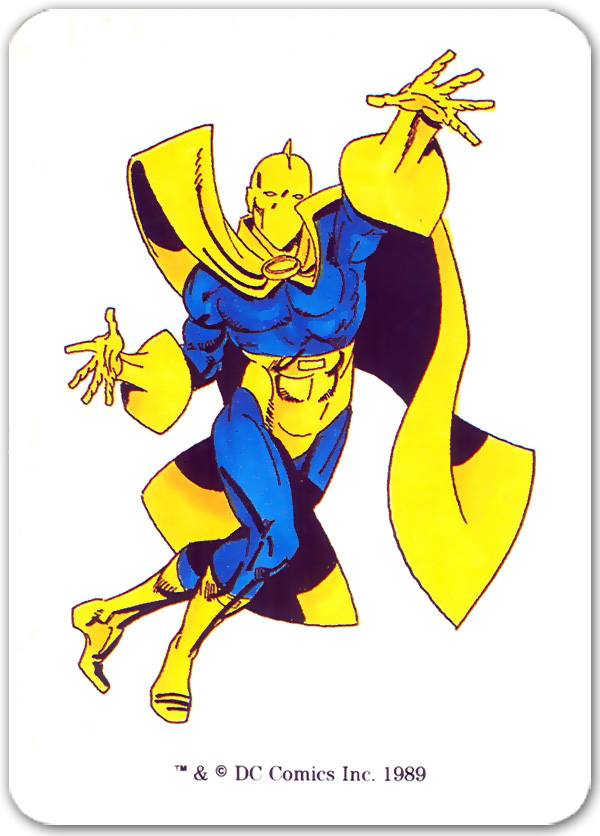 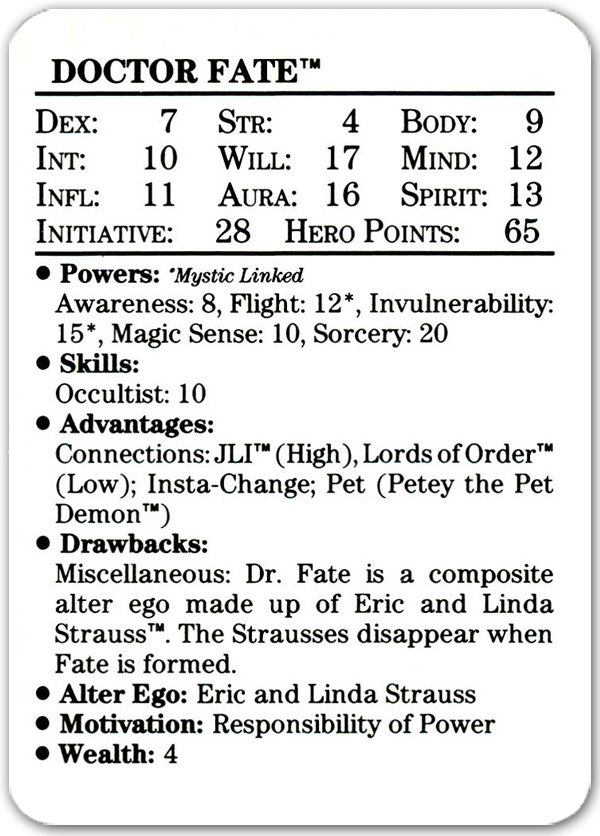 The statistics above represent the second incarnation of Doctor Fate.  At this point in time, the Ankh-Bolt Adventurer was a composite being created by Eric and Linda Strauss.  It’s a complicated tale.  When the story started, Eric was a young boy and Linda was his step-mother.  By the end, they were dead.  Their spirits were living on in other people’s bodies, they were married to one another, and they were raising a baby fated to usher in a new age for all mankind.  … Yeah, I know how it sounds.  Trust me, it was really good.

During the time when Mayfair had the license to DC Heroes, they published a few different versions of Doctor Fate’s statistics.  I considered posting them all here today, but decided just to focus in on the character card.  These cards really were one of my favorite aspects of the box sets.  I’ll be sure to include those other versions whenever I do a “Doctor Fate Week” here on ONCE UPON A GEEK.

The art on the card isn’t the greatest, but I’ve certainly seen worse.  It would have been nice if they’d had series artist Shawn McManus draw the card.  He did a fantastic Doctor Fate!

It’s worth noting that Doctor Fate’s “Sorcery” power is only rated at 20 points here.  This is one of the weakest incarnations of Doctor Fate.  The reason for this was that Eric and Linda were still learning the ropes as Doctor Fate, without the benefit of Nabu’s spirit within the helmet.  Just in case you are wondering, Nabu was still around.  He was inhabiting Kent Nelson’s animated corpse, and generally being a jerk to Eric and Linda.  …. Yeah, I know.  Trust me, it was really good.

We’re taking a break on Saturday and Sunday.  Our Mayfairstivus coverage will resume on Monday!  Come back then when we look at the Animal Man character card from the 1989 edition!