Welcome back for the sixth day of Mayfairstivus, the nine day celebration of Mayfair Games’ DC Heroes Role-Playing Game! We took a break on Saturday and Sunday, but we’re back today for more Mayfairstivus holiday fun!  Today we’ll be looking at the 1989 character card for Animal Man!

I don’t talk about him much here, but I really dig Animal Man.  If you’re not familiar with the character, he’s a somewhat regular guy, married with kids, and gets caught up in nutso adventures.  His secret identity is Buddy Baker, and most people end up calling him Buddy rather than Animal Man.  I’ve really enjoyed this character ever since I started reading his monthly series in 1989.  I would highly recommend the old Grant Morrison Animal Man series to anyone (trade paperbacks volume 1, volume 2, and volume 3).  It’s definitely one of Grant’s more subdued works. 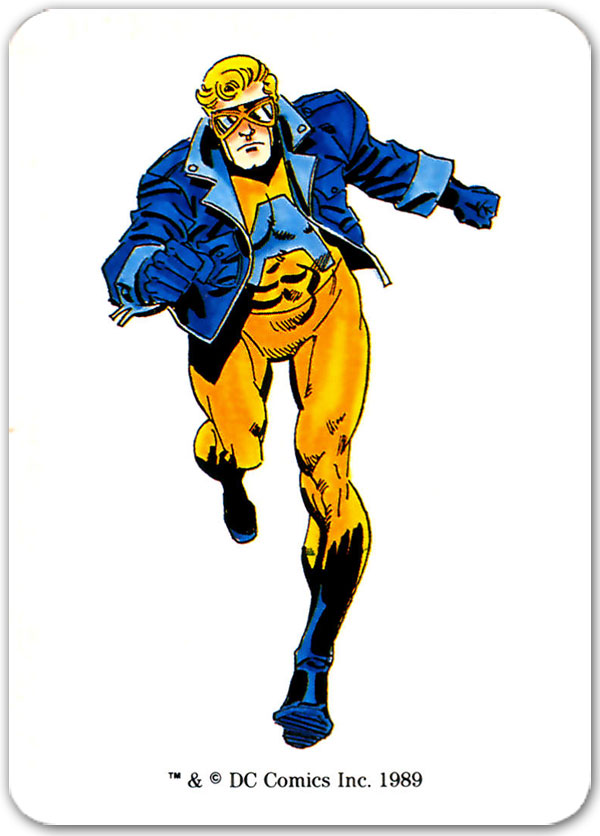 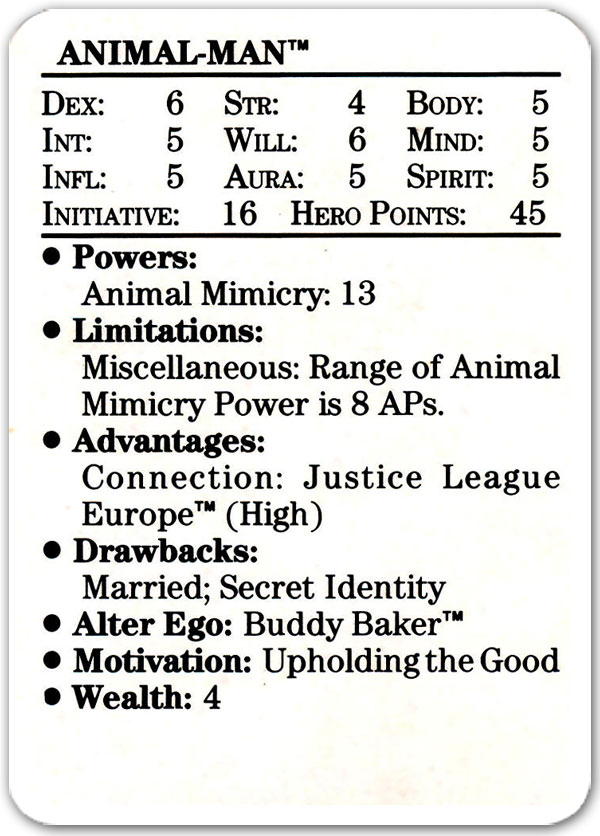 Even if you don’t know anything about the game, you can tell from his powers that he wasn’t an overly powerful character.  Sure he could gain the proportional strength of an ant (meaning he could lift objects over his head weighing more than 20 times his own weight) or fly like an eagle, but he wasn’t the typical over-the-top powerhouse that era was known for.

The card art is actually pretty good on this one.  While I’d rather of had Brian Bolland (cover artist for the early Animal Man issues), this card art is certainly an improvement over the regular series artist Chas Truog.

Just thinking about Buddy has got me anxious to go back and re-read those Grant Morrison issues.  So good!

Don’t forget, the Mayfairstivus celebration continues at the following blogs!  Be sure to check them out throughout the Mayfairstivus celebration (Dec. 1-9).  I’d like to send a quick thank you to Walter from the BOO$TERRIFIC blog!  He provided me with a Photoshop template that adds a nice shadow effect on the scanned cards.  Thanks Walter!   Additionally, a huge thanks to Frank Lee Delano (of the blogs: Martian Manhunter: Idol-Head of Diabolu, Justice League Detroit, Atom: Power of the Atom, Wonder Woman: Diana Prince, DC Bloodlines, and …nurgh…) who not only masterminded the crossover, he also provided most of the card scans!  Thanks, Frank!

Come back tomorrow when we look at the Starman (Will Payton) character card from the 1989 edition!