If you’re a fan of Doctor Who, you’ve probably heard by now that Elisabeth Sladen (the actress who portrayed Sarah Jane Smith) passed away yesterday. 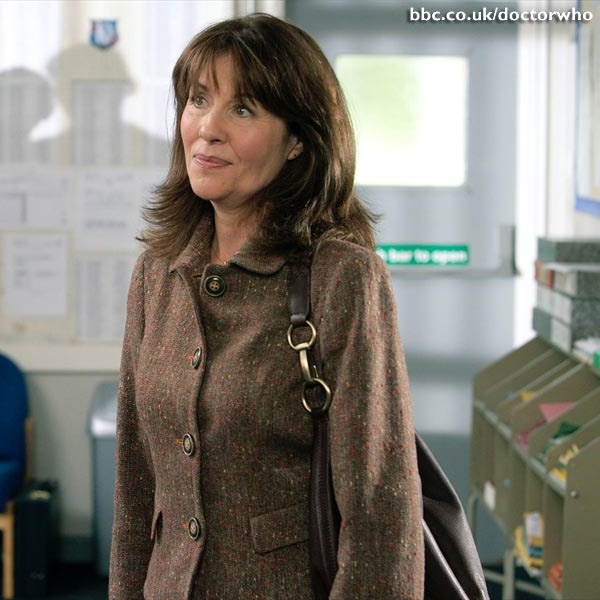 For news of her passing, visit the Doctor Who News Page.  Those folks will do an excellent job providing all the newsworthy details of her death.  While they report the news, I’m going to focus on my own personal feelings.

Hearing the news about Elisabeth Sladen really shook me.  Just a few short months ago we lost Nicholas Courtney and now this.  I realize death is part of life, but c’mon!  This isn’t fair!  This has totally blown any anticipation I had for this Saturday’s Doctor Who season opener.

I’ve been watching Doctor Who for nearly 30 years now.  Hands down, Sarah Jane Smith is my favorite companion.  Always has been, always will.  I first encountered Sarah Jane in Genesis of the Daleks in 1982, my very first glimpse of the show.  The early Tom Baker years were the first episodes I saw on a regular basis, so like most other young men I totally crushed on Sarah Jane.   She was everything a 10 year old boy wanted from a girlfriend.  Her smile lit up the room, she went on adventures, she fought evil, she constantly needed rescuing, she was so very sweet and friendly, and she always stuck by her best friend.   She was cool!  She wasn’t just a companion, she was a hero!

When I was older and re-watched several of her episodes, I was surprised just how likable she was as a character.  This was entirely due to Elisabeth Sladen’s fantastic performance.  Sladen’s Sarah Jane was warm, friendly, and believable.  Seeing Sarah Jane in later stories such as The Five Doctors or Dimensions in Time just reaffirmed how excellent the character was. While I can find something to like about every companion, Sarah Jane was THE premier Doctor Who companion as far as I was concerned.  Re-watching episodes like Genesis of the Daleks or Ark in Space, I can now see just how foxy she was as well!

When Elisabeth Sladen returned to Doctor Who for the episode “School Reunion” in 2006, I was overjoyed.  That episode was a real tear-jerker for me.  Seeing one of my favorite characters back in action after so long really pulled on the heartstrings.  Shortly after that, BBC announced The Sarah Jane Adventures.  Good for Elisabeth Sladen!  Nearly 30 years after leaving Doctor Who, she was granted her own spin-off (for a second time if you remember K-9 and Company)!  It’s not often an actor or actress can walk away from a role, then turn around 30 years later and make it even more popular!

She was really a great actress, even in her more recent appearances.  In the Doctor Who episode “Journey’s End”, Sarah Jane starts to cry and quiver with fear after hearing Davros’ voice again after 30 years.  Every time I watch Elisabeth Sladen cry, I start to tear up as well.  Also, it’s a testament to Sladen’s performance that the character of Sarah Jane Smith has worked so well with numerous Doctors (Jon Pertwee, Tom Baker, David Tennant, and Matt Smith).  She made you believe these actors were playing the same character that she traveled with all those years ago.  She was so good!

I’ve only seen Elisabeth Sladen in a few interviews, but she always seemed like an absolutely wonderful lady.  From everything I’ve read about her, she was a talented and dynamic actress who was always friendly.  I had hoped to meet her one day at a convention, but now that can never happen.  Such an amazing woman and character.  She will be sorely missed.  The following cartoon speaks for itself…

When I was a child I thrilled to the adventures of the Doctor and Sarah Jane.  One of my greatest Doctor Who-related joys is that 30 years later and my own children have been able to thrill to their new adventures!  Elisabeth Sladen and Sarah Jane Smith… rest in peace.

This post was a sort of catharsis for me. I had a lot of feelings roiling around about Elisabeth Sladen’s death and I had to work through them somehow. Upon re-reading this entry, I really didn’t convey what a wonderful actress Sladen was, what a great character Sarah Jane was, and the empty hole left behind by her passing.

My friend Ed sent a link to an article about Elisabeth Sladen on io9. I highly recommend you go read it. Some of the quotes and comments started me tearing up again.