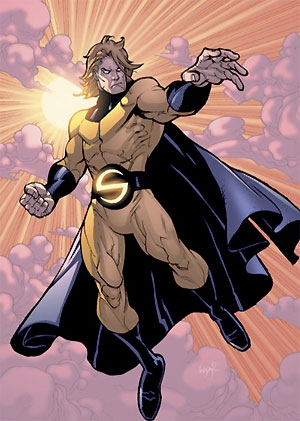 I try to be positive and encouraging in my blog, rather than negative and pessimistic.  However, there are a few things that simply bother the heck out of me.  One such thing is the Marvel Comics superhero named “The Sentry“, the golden guardian of good with the power of one million exploding suns.  Goodness gracious, why can’t this character die or simply fade away into obscurity?

The Sentry was introduced in the year 2000 and is essentially the Superman equivalent in the Marvel Universe.  I’m not going to cover his whole background here; you can read all of that over at Wikipedia.  The primary difference between Superman and the Sentry is that Superman has his act together.  The Sentry is a psychological wreck.  In general, I think that’s an interesting concept – What if Superman came to Earth but suffered from mental breakdowns?  There are some fascinating stories that could come out of that idea with some really dense plots.  However, the writing for the Sentry character so far has been so lackluster that most fans simply are waiting for him to go away.

I never got to read the first Sentry mini-series, but I’ve heard it was decent.  In the mini-series it’s revealed that the Sentry was one of the premier heroes of the Marvel Universe back in the day (along with the FF, the X-Men, Spider-Man, etc).  Due to a series of circumstances, the memories of everyone in the world were altered to forget about the Sentry.  So when he returned in 2000, it was quite confusing for him and the others that began to remember him.  That’s actually an interesting plot.  It seems very feasible to me that one of the kooky 1960’s stories featured planet-wide memory alteration.  In fact, it was such an interesting concept that DC Comics did almost the exact same thing back in 1994 with a JLA character named Triumph (six years before the first appearance of the Sentry).  Considering how crappy Triumph turned out, you’d think Marvel wouldn’t have bothered to steal the idea.

After the first mini-series, the Sentry joined Brian Michael Bendis’ “New Avengers“.  As one of the most powerful individuals on the planet and a member of the foremost superteam, the Sentry managed to do just about nothing over the course of a couple years.  Then came the second Sentry mini-series, which was one of the most painful comics to read… EVER.  It was really, really bad.  Next, for no apparent reason, the Sentry joined Brian Michael Bendis’ “Mighty Avengers” and has continued to contribute very little.  And finally, Marvel has recently started a new mini-series entitled, “The Age of the Sentry“.  While the new mini-series has a new writer and a retro feel to it (see picture right), I just can’t bring myself to read another Sentry comic.  I’m voting with my dollars on this one and I hope many other fans will do the same.

While the Sentry could have been the deciding factor and resolved many Marvel Universe stories (such as “Civil War”, “World War Hulk”, and “Secret Invasion”), he seems incapable of setting his mind to anything during times of extreme stress.  When he does finally commit to being involved in these world-threatening events, he ultimately contributes very little.  Personally, I think this is a writer’s crutch so that the Sentry doesn’t just sweep in and fix any problems the writer has created for the heroes.  At first I could buy into the fact that the Sentry didn’t get involved for whatever reason of the day.  Now that it’s happened a few times, I think it’s just ridiculous.  The Sentry could actually be a cool character, but time and again he’s been reduced to a coward or an indecisive flake.  The Sentry also has some subplots that could be interesting… the operative word being “could”.  These subplots include: his mechanical assistant CLOC, his repetitively-resurrected wife, and The Void (Sentry’s dark half/alter-ego).  Again, less-than-stellar writing has made these subplots more bothersome than fascinating.

Brian Michael Bendis seems keen on including the Sentry in his Avengers titles, so I gotta think he has a plan for the character.  Since the “New Avengers” title began back in 2004, the Sentry has pretty much been surplus to requirements.  So maybe Bendis is planning to shock the readers with some big revelation or action regarding the Sentry.  For example, maybe the Sentry’s destiny is connected with the “Secret Invasion” storyline.  When Bendis started the “New Avengers” title he had already begun to map out what would eventually become “Secret Invasion”.  Perhaps one of the reasons Bendis has continued to carry the Sentry character is that he’s integral to the “Secret Invasion” series.  Who knows?  One can dream and hope.  Wouldn’t it be nice if the Sentry was simply a Skrull or died in the penultimate battle with the Skrulls?  That would be many kinds of awesome.

Now it’s fair to say that I’m about a month behind on reading my comics.  So if Sentry has done something interesting in that time, I’ve missed out.  However, my Sentry-Sense hasn’t been tingling, so I seriously doubt they found anything worthwhile for him to do other than cry in the corner.

If I had my druthers, Marvel Comics would either kill the Sentry or simply make him go away.  Considering how little he’s added to the Marvel Universe, why does he continue to hang around?  Can’t he indecisively meander off to the Avengers Has-Been Home?  He could play checkers with Silverclaw and shuffleboard with D-Man.  Wouldn’t that be nice for his golden years?  (pun intended)

I’m not the only one who feels such frustration about this character.  The folks over at Old-Wizard.com did a great piece on him in August entitled, “Worst Character Ever?” The guys at iFanboy did an article in June entitled, “The Sentry Problem: Void Where Prohibited“.  Both are definitely worth a read.  And finally, I wish the owner of the URL http://www.killthesentry.com/ would get that site up and running.  I’d be a big supporter.

6 thoughts on “Guarding the Marvel Universe: Sentry Must Go”