Just Announced! The 11th Doctor is…

It’s official!  The actor who will replace David Tennant in Doctor Who starting in 2010 is Matt Smith.  He is the youngest actor to take on the role. 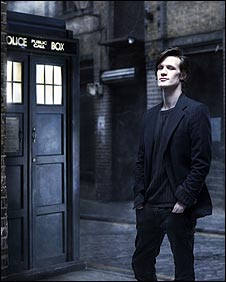 26-year-old actor Matt Smith has been cast as the Eleventh Doctor, as revealed in today’s special broadcast of Doctor Who Confidential on BBC One. Smith will succeed David Tennant in the role for the fifth series, which begins filming this summer and will air in 2010.

Smith has appeared in various television productions, including alongside Billie Piper in the BBC’s adaptations of the Philip Pullman novels The Ruby in the Smoke and The Shadow in the North. He co-starred in the drama series Party Animals, and on stage was in Alan Bennett’s acclaimed play The History Boys.

Smith was born and bred in Northampton, England, and later attended the University of East Anglia in Norwich. He is the youngest actor ever to have been cast as the Doctor in the TV series.

From the BBC Press Office:

Matt Smith said of his new role: “I’m just so excited about the journey that is in front of me. It’s a wonderful privilege and challenge that I hope I will thrive on.

“I feel proud and honoured to have been given this opportunity to join a team of people that has worked so tirelessly to make the show so thrilling.

“David Tennant has made the role his own, brilliantly, with grace, talent and persistent dedication. I hope to learn from the standards set by him.

“The challenge for me is to do justice to the show’s illustrious past, my predecessors, and most importantly, to those who watch it. I really cannot wait.”

Lead writer and Executive Producer Steven Moffat said: “The Doctor is a very special part, and it takes a very special actor to play him. You need to be old and young at the same time, a boffin and an action hero, a cheeky schoolboy and the wise old man of the universe.

“As soon as Matt walked through the door, and blew us away with a bold and brand new take on the Time Lord, we knew we had our man.

“2010 is a long time away but rest assured the 11th Doctor is coming – and the universe has never been so safe.”

7 thoughts on “Just Announced! The 11th Doctor is…”