Dear Mr. Watterson… A Thank You to the Creator of Calvin and Hobbes 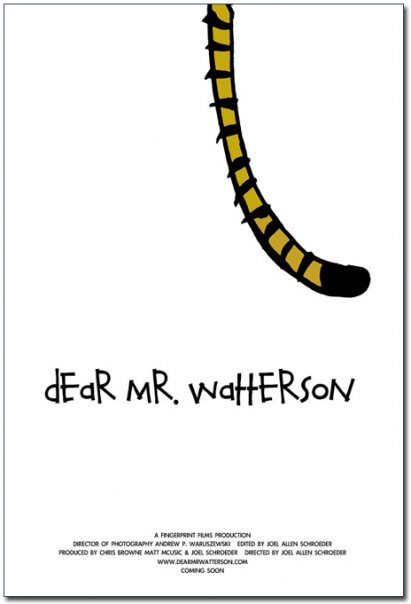 Dear Mr. Watterson is a film project spearheaded by Joel Allen Schroeder.  According to their website,  “Dear Mr. Watterson is a film that will look to the readers and fans of Calvin & Hobbes to tell the story of the strip and its creator. As we follow the life and career of Bill Watterson through this unique perspective, the undying appreciation and love of Calvin & Hobbes and the man behind it will be evident in the anecdotes, stories, and memories shared by readers of the strip and friends and colleagues of Mr. Watterson.”

If you’ve been reading ONCE UPON A GEEK for a while, then you probably know I’m a big fan of Calvin and Hobbes.  I gotta say folks, this film looks great!  Check out the trailer below:

Teaser from DMW on Vimeo.

I’m really excited for this project!  In the spirit of the upcoming film, I wanted to share my own first experience with Calvin and Hobbes here.  I first became aware of the strip in the summer of 1987. I was about 15 years old and visiting my father in Madison, Wisconsin.  Where I lived in Florida, the local newspaper did not carry the Calvin and Hobbes comic strip; in fact, I’d never heard of it. Like any bored teenager in the 1980s, I read the daily comics for amusement.  I quickly discovered that the Madison paper carried a much wider variety of strips than my paper back home.  One such strip was called Calvin and Hobbes.  It was hilarious!  I immediately related to the character of Calvin and began seeking out the strip each morning. As Madison was a recycling town (not a common practice back in ’87), my father’s garage was full of old newspapers. I spent hours sifting through these old papers reading Calvin and Hobbes strips. Within the matter of a week, I’d read several months worth of the strip.  I was hooked!  At the end of the summer, I returned to my hometown and it’s sadly inadequate newspaper.  This could have resulted in the end of my love affair with Calvin and Hobbes, however, my step-mother intervened to provide my much needed Calvin-fix.  She dutifully cut out the Calvin and Hobbes strips every day and would mail them to me in batches about once every three weeks. I would wait anxiously for this package of joy. I’d then tape the strips down on three-ring paper, essentially making my own books. Eventually, my local paper picked up the strip and the official collections became readily available. However, I’ll never forget my initial discovery and those wonderful packages from my generous step-mother. There you have it… the secret origin of a Calvin and Hobbes junkie!

If the upcoming film looks interesting to you, there are a few avenues for you to stay connected with the project.  First, check out the web site at dearmrwatterson.com for updates on the film.  Next, join the Facebook group dedicated to this movie.  Finally, check out their new Twitter account.

I found out about the film recently when I was interviewed for Racket Magazine.  They stumbled across my praise for Calvin and Hobbes here and contacted me to ask about my fandom of the comic strip.  You can read the interview Racket Magazine did with both Joel Allen Schroeder and myself by clicking here.

And remember each night as you lay down to fall asleep… something under the bed is drooling.

2 thoughts on “Dear Mr. Watterson… A Thank You to the Creator of Calvin and Hobbes”