You’ve probably already heard, but Neil Gaiman’s Death (from Sandman) is scheduled to appear in the October issue of Action Comics.  This isn’t the first time Death has appeared in a superhero comic.  Here are two examples where Death appeared outside of the Vertigo line.  It hasn’t happened very often and it was long ago.

Probably the most effective use of Death outside of Vertigo was her cameo in Legion of Super-Heroes #38 in 1992.  The story featured the destruction of the planet Earth in the 30th century.  After centuries of pollution and damage from alien invasions, the Earth could no longer sustain itself.  Many evacuated the planet, but over two billion were left behind when the Earth exploded.  While Death wasn’t mentioned by name, she appeared in the art very effectively.  The explosion in her left eye is a carry-over from the previous two pages (an enormous two-page splash of the Earth exploding).  This story was incredibly powerful, written as prose with a single art panel per page.  Seriously, this one will move you to tears.  Below you’ll find the one panel she appeared in. 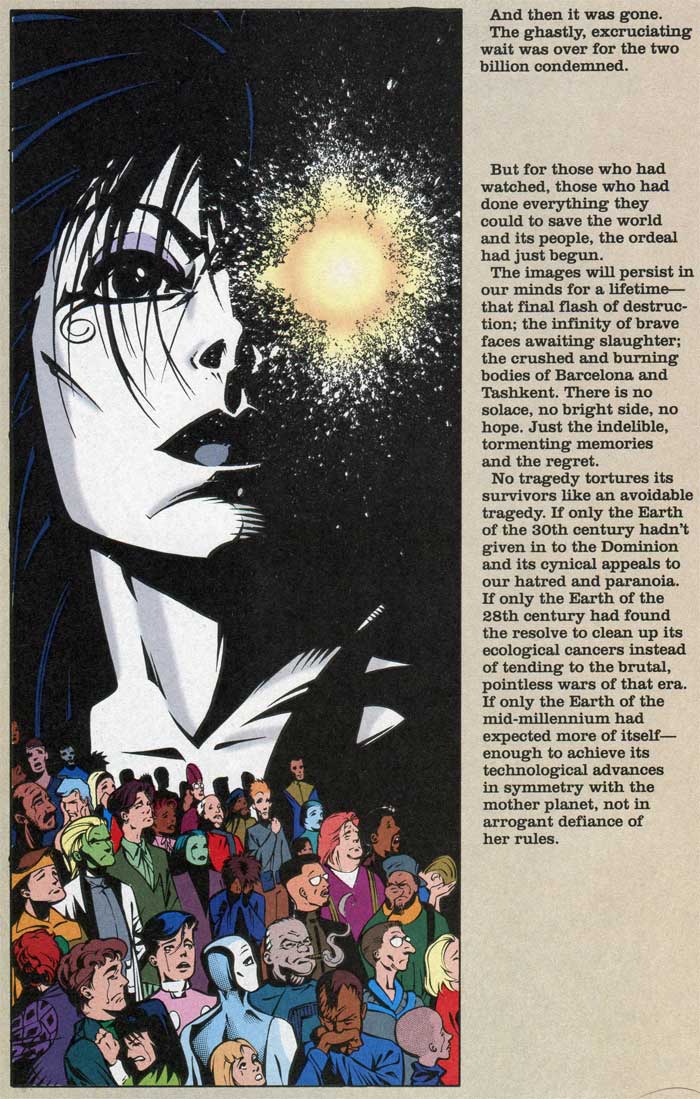 Death also appeared in Captain Atom #42 in 1990.  The story featured Captain Atom in the afterlife.  Interestingly enough, this comic was Death’s third appearance anywhere (previously appearing only in Sandman #8 & #13), making this her first appearance outside of the Sandman title.  Also worth mentioning was seeing Death side-by-side with the Black Racer.  Pretty neat!  A final point of interest is that Nekron (of Blackest Night fame) is also featured prominently in this issue and the next.

Clearly artistic guidelines hadn’t been set for the Death character at this point. You’ll see she’s drawn very chesty, and her skin is normal color (albeit with a white outline).  I suppose you could “No Prize” this by stating that Death appears differently to different folks.  Perhaps Captain Atom has a thing for tan, busty Goth chics.

Below you’ll find one page featuring Death.  She appeared on several pages in the issue.

For a complete listing of Death’s appearances, please click here to visit the Comic Book Database.

Below you’ll find the cover to Action Comics #894 by David Finch shipping this October.  This issue will be written by Paul Cornell and drawn by Pete Woods.  What an amazing drawing by Finch!  It absolutely captures her cute, yet haunting, look.

For more information on Death’s upcoming appearance in Action Comics, please visit the links below.