The new Star Trek movie is coming, whether you like it or not! And this time they are aiming to make Star Trek cool.  Hard to believe, I know.  Directing and producing this new Star Trek film is J.J. Abrams (Lost, Alias, Fringe, Cloverfield), so there is a good chance the movie will be entertaining (even if you don’t like Star Trek).  In fact, Abrams has been quoted as saying, “We weren’t making a movie for fans of Star Trek. We were making a movie for fans of movies.”  That’s encouraging!  The release date is May 8, 2009, but there is already lots of news and photos making their way through the tubes and the internets. After looking through all this information, I’m really starting to get psyched for the film!  Can’t wait for May 8, 2009!  And now… on with the photos! 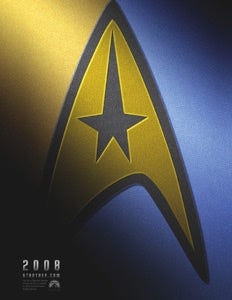 Dr. McCoy played by Karl Urban, with Kirk in the background. Picture from Entertainment Weekly.

The saucer section of the original Enterprise under construction. Picture from Screen Rant. The updated bridge of the Enterprise.  Picture from MTV Movies.

Kirk climbing from a crash landed shuttle.  Picture from IGN.

Another Nero pic.  Picture from JoBlo.

USS KELVIN – Before Kirk is even born, this ship comes under Romulan attack, launching the plot for the new movie.  Picture from Entertainment Weekly.

The USS Kelvin takes a hit in the film’s opening sequence. Picture from TrekMovie.com.

And finally, not a picture from the new movie but a motivational poster I absolutely love.  Picture from Screen Rant.