I just got some new Doctor Who Classic action figures!  This time out it was a set of four Cybermen that were just released.  Each Cyberman came with a “Collect and Build” piece to create a fifth figure, the classic Cyber Controller.  I took a picture to show them off, but it didn’t come out that clear (reflective silver paint plays havoc with camera flashes). 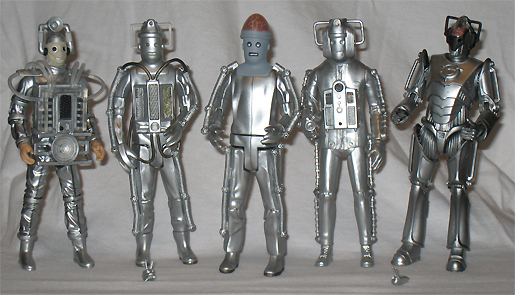 Check your online retailers and order the Cybermen above today – don’t delay!  They are selling out quickly.  Also, near as I can tell the Tomb of the Cybermen figure is the same as the one offered in the SDCC two-pack.

Once they release an Earthshock Cyberman, my cyber-race will be complete!  Then … YOU WILL BE LIKE US!