While on the cruise, I finally got around to reading the Eureka graphic novel from BOOM! Studios.  I was pretty exited to see the story was by the Eureka TV show creators Andrew Cosby and Jaime Paglia.  That tells you right away that it’ll be faithful to the series.  In interviews the creators have referred to their Eureka comic work as Season 1.5 of the TV show, and that the comics should be considered official Eureka continuity.  As a fan of the TV series and an avid comic reader, I was pretty thrilled about this!  This story was originally published as a four-issue mini-series and then collected.  It was to be the first of four Eureka graphic novels, however, only two have been produced to date. 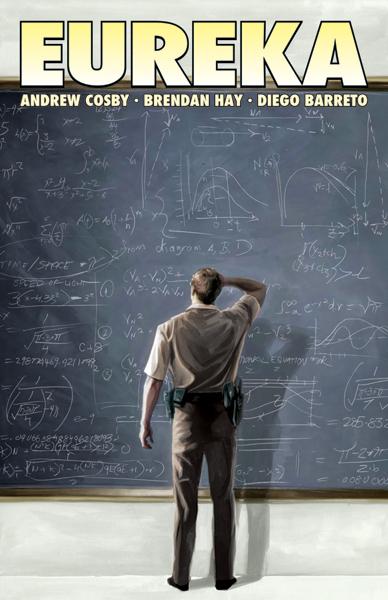 Here is the graphic novel description from BOOM! Studios:

Sci-Fi Channel’s smash hit TV show comes to BOOM! The first arc of Eureka is collected in this volume, masterminded by the creators of the show and told completely in continuity! It’s a game of cat and mouse when Sheriff Cater is on the hunt for an escapee from Global Dynamics. But what connection does this dangerous stranger have to Carter’s partner, Jo Lupo?  Story by Andrew Cosby and Jaime Paglia, Script by Brendan Hay, Art by Diego Barreto, and Cover Art by J.K. Woodward.   112 pages, Full color, 9″ x 6″, MSRP $15.99

Overall this was a good read.  The story was solid, the characterization was dead-on, there was a good dose of humor, and it truly felt like an episode of the TV series.  We get to see most of the show regulars, such as: Sheriff Carter, Allison Blake, Deputy Jo Lupo, Zoe Carter, Nathan Stark, Henry Deacon, Douglas Fargo, Vincent, and even Taggart.   A major portion of the plot revolves around Jo Lupo’s past, which is nice to see explored here.

One of the chapters (or issues depending on how you look at it) featured a cliffhanger ending with the surprise return of Warren King.  That’s right, Warren King!  I know what you’re thinking, Warren King!  Seriously!  Wow!  … … okay, I didn’t know who he was either.  I had completely forgotten that the Director of Global Dynamics in the pilot episode was Warren King.  Remembering that character was made even more difficult by the interior art.  The panel layouts, action, and storytelling are all fine in the comic, but the artist did a poor job capturing the likenesses of the actors.  With the obscurity of the character and the weak art, I’m not sure anyone could have got the full effect intended in the cliffhanger.  By contrast, the painted covers for the individual issues, which were presented in the graphic novel, are really gorgeous.  The covers capture the spirit of the show as well as the likenesses of the characters.

Overall, any fan of the Eureka TV series would enjoy this graphic novel.  I would say this story is the equivalent of one really good episode of the TV show.  However, at the price of $15.99 for the graphic novel, I’m not sure it’s worth it.  After all, you can get an entire season of Eureka on Amazon.com right now for $21.99.  My recommendation, borrow the graphic novel from a friend.