Secret Origin of the Red Lantern – Greatest Hero that Never Was

For those of you following DC Comics and Blackest Night, you may be aware that our first glimpse of a Red Lantern was in 2007.  But did you know it could have been a lot sooner?  A lot sooner as in … 1940?  Given slightly different circumstances, Alan Scott the original Green Lantern may have been named the Red Lantern. 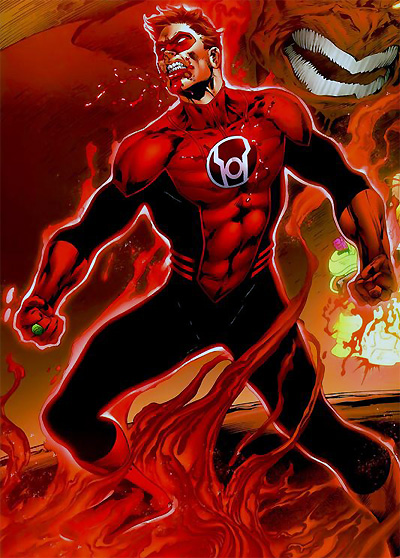 An excerpt from Alter-Ego #5 (published in Summer 2000), an interview with Martin Nodell on his creation of Alan Scott, the original Green Lantern.

MARTY NODELL: I was going home to Brooklyn, and I tried working out some ideas as I got to the station. I was writing down everything I could possibly think of. I thought, “Gee, I’ve got to do this real quick, because if I think of something, other people will, too. It might have some meaning to them, too.”

As I entered the subway, there were a number of people standing around, and there was a train man in the subway station, in the trough of the tracks, and he was waving a red lantern, which meant, “Hold the train, don’t come in.” When he checked the tracks, he waved a green lantern. The green lantern meant, “Come in.” As the train would come in, he would get out of the way, get behind a pole and stay there, and that was the end of his part in “Green Lantern.”

But when that green lantern meant something to me, I just wrote it down: “The Green Lantern.”

ROY THOMAS: Since “green lantern” meant “okay, everything’s all clear,” but “red lantern” meant “danger,” which of course one would associate with adventure stories, I wonder how come we got a Green Lantern instead of a Red Lantern.

NODELL: Well, just simply that the green lantern appeared to me as being important.

RT: Well, it obviously worked, right? Sixty years later, people still know that name. It’s oddly popular. For instance, on the old Route 66 in Missouri, there was a Green Lantern restaurant in the early 1960s. There was also a bookstore called The Green Lantern in the early-’40s movie serial The Secret Code. But both are long after your character. I always wondered, “What’s with this fascination with green lanterns?” [Laughs]

NODELL: To me, it was just a matter of how I put everything together. The possibilities, to me, were a characterization, or pictures, of a meteor falling into a small Chinese town, and that became the method wherein a green lantern was built in.

RT: Do you think the kind of lantern that train man used in the subway station was pretty close to the kind you drew on your hero?

NODELL: Quite close. That was the only important lantern to me, and I didn’t think of any other kind of lantern at all. And then, thinking of Greek mythology, I designed a costume, and that costume seemed to me to be very important to the eye.

Just imagine, Marty Nodell could have easily decided instead to name Alan Scott the Red Lantern!  So what would that have meant for readers if he’d been the Red Lantern, instead of the Green Lantern?  Not much really.  He probably would have had the same powers, just with a different color.  In fact, Alan’s costume already has nearly as much red as it does green.  Just change the color of the lantern in his chest emblem.

If he’d been the Red Lantern, I imagine some writer would have eventually tied-in his powers with fire somehow.  If you look at the early Green Lantern stories, his energy often looks like green flames.  If the color had been red, I think it would have been an easy extrapolation to connect his power with fire somehow.  Perhaps something like a Fire Elemental connection.  I can envision a recon like this taking place in the mid-80s around the time Swamp Thing and Red Tornado were retconned as the Plant and Air Elementals.

Just for interest sake, below you’ll find images of a couple red train lanterns I came across in an antique shop in Savannah, Georgia.  Having heard Marty’s story previously, these train lanterns attracted my attention. 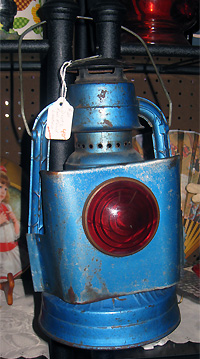 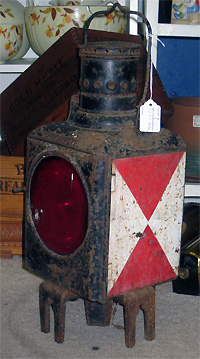