The Battlestar Galactica Colorforms Adventure Set Deluxe Edition was released in 1978.  I remember playing with these and other Colorforms sets for hours and hours.  Somewhere along the line I lost my BSG Colorforms, but my good buddy Ravenface was kind enough to supply me with a set he bought in a garage sale back in the late 1990s.  I think he got it for $1.  Nowadays you can find them online with prices ranging from $23 – $36.

What a gorgeous cover!  I used to have a poster of that image!  Loved it!  The set is huge too – the box measures 12.5″ x 15.5″.  Above you can see the exterior of the box with the quote, “Create exciting scenes from BATTLESTAR GALACTICA with Coloforms plastic that Sticks like Magic.  Can be used over and over again. Never wears out.”  I don’t know about “never”, but 30 yahrens later and they still sort-of stick.  However, the typographical error on the box cover is driving me mad!  On the fourth line the word “Sticks” is capitalized.  There is no reason for that!  Arrgghhh!  The proofing Nazi in me is unforgiving.  With that said, my grammar is terrible, so I really can’t fault them.

Below you’ll see the interior of the set.  I always loved the booklet as  kid.  You could see example play-scenes and other available products.  In this booklet they are advertising: Mickey Mouse, Snoopy, Ernie & Bert, Cookie Monster, Barbie, Holly Hobbie, Batman, and Raggedy Ann.  There is also a note to the parents worth repeating:

Who knew we were learning while having fun?!?!? 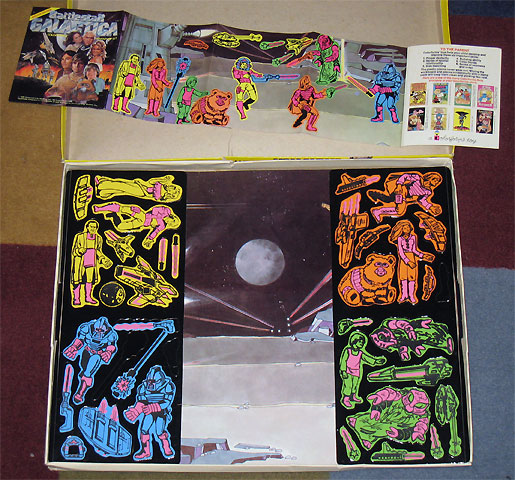 Here is a close-up of the yellow Colorforms.  The dork in me can easily recognize the characters.  I’m pretty confident that is Baltar, Cassiopeia, and Apollo. 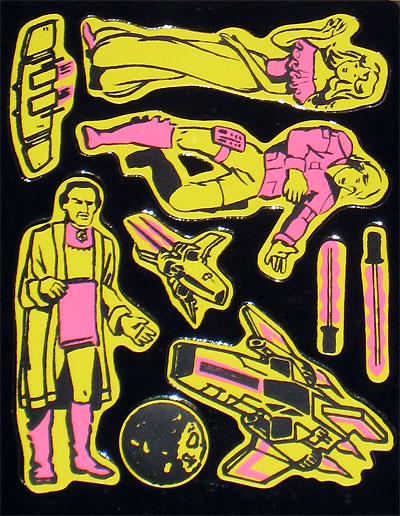 Close-up of the blue Colorforms.  Clearly the Cylons.  I like their big meaty helmets. 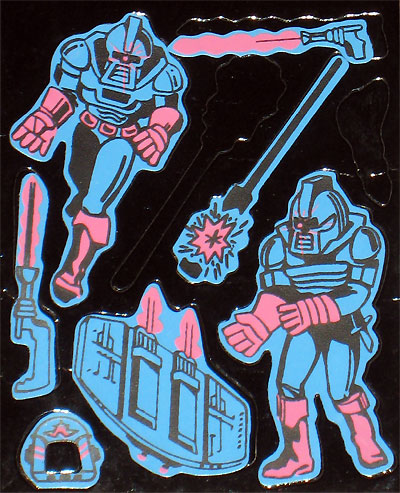 Here we’ve got Athena, Muffit the Daggit, and Starbuck.  I’m pretty sure this one is Starbuck based upon the longer hair and the cape.  It’s possilbe that I’ve got Apollo and Starbuck backwards, but does anyone but me really care that much? 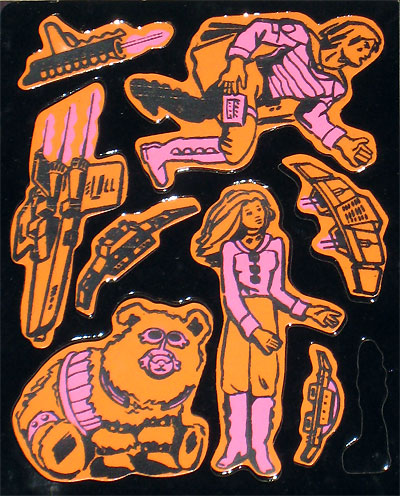 Here we’ve got Boxy and Ovion bug monsters from the casino on Carillon. 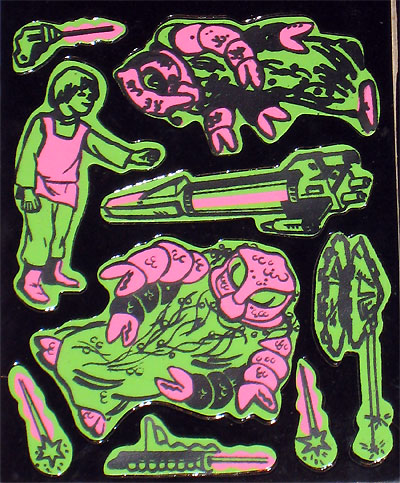 And finally, here is the playset depicting one of the greatest moments of Battlestar Galactica.  It’s the … It’s the… Escape from Hoth?  WTF?  I have no idea what this setting is supposed to be.  Turrets and a crazy looking X-Wing fighter?  Maybe someone from the 20th Century Fox studio got drunk and barged into the Universal City Studios Colorforms department.  Yeah, that’s makes sense.

There are those who believe that life here began out there, far across the universe, with tribes of humans who may have been the forefathers of the Egyptians, or the Toltecs, or the Mayans. Some believe that there may yet be brothers of man who even now fight to survive somewhere beyond the heavens…