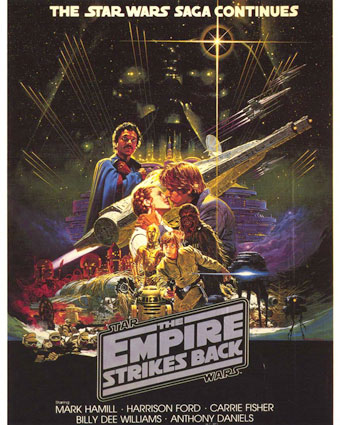 Remember VH1’s Pop-Up Videos?  Can you imagine a Pop-Up Video for Empire Strikes Back?  Well, someone else did.

Building Empire is an amazing fan-made film providing tons of behind the scenes facts about Star Wars: The Empire Strikes Back.   For example, have you ever heard about the abandoned Wampa attack subplot in Empire?  It’s covered in this film, including very rare photos.  Here is the description from the YouTube page:

In an ambitious effort to collect all material from Star Wars : The Empire Strikes Back, into one insightful project, author Jambe Davdar has presents ‘Building Empire’. The result of eight months hard work, this labor of love provides an extensive look at the making of Episode V.

It incorporates many rare alternate takes, production audio, on-screen facts, cast and crew commentary, re-created scenes, storyboards and behind the scenes footage to give you the must-have companion to the second chapter in the original Star Wars Trilogy.

The entire film has been uploaded to YouTube.  Check out the first part below.  Click here to be taken to YouTube where you can find the rest.

If you enjoy this, he also produced Returning to Jedi and is still working to complete Star Wars Begins.

My thanks to the guys at TWO TRUE FREAKS for directing me to this.