Stargate Universe. When the show first premiered, I wasn’t sure what to make of it. I compared it to previous Stargate series, Battlestar Galactica and Star Trek: Voyager.  Within a couple weeks all that was forgotten and it was rapidly becoming one of my favorite shows on TV.

If you’ve never seen the show, the story follows a group of soldiers, scientists and civilians that were unexpectedly transported to the other side of the universe. Stranded billions of miles from Earth on an Ancient ship known as the Destiny, the passengers encounter adventures beyond their wildest dreams as they struggle to survive.  The drama is high and the stories are intense.  One of the best things about this show is the characters ring true.  These are not classic heroes that never make a mistake.  These folks are struggling every day to keep going.  They are flawed … and most importantly, they are interesting. 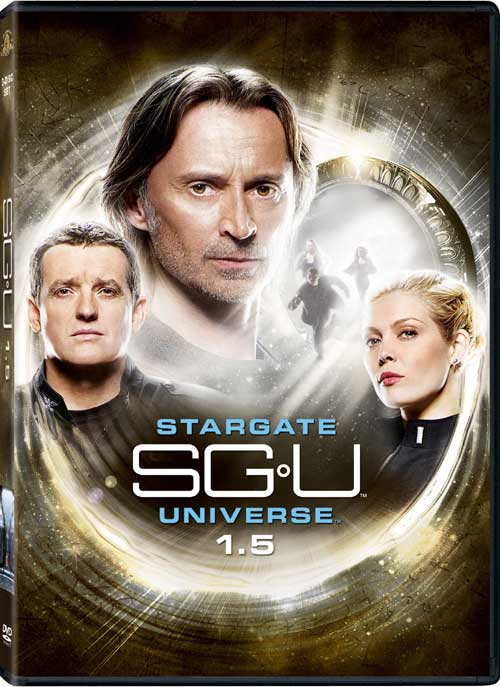 Stargate Universe 1.5 (3-disc DVD set) went on sale last Tuesday and includes the final 10 episodes of the season.  If you even moderately enjoyed the first half of the season, then you’re really going to love the second half.  Things really ramp up right away!  The creators obviously learned what worked and what didn’t during the first half of the season.  Stories include: an attack by a wicked new alien race, an attempted mutiny on the Destiny, sympathy-creating insights into why Dr. Rush is such a jerk, crazy hallucinations, an attack by the Lucian Alliance, and a season finale that will leave you breathless.  Seriously, these 10 episodes make for great television!

A quick personal story… somewhere towards the end of these 10 episodes, I realized that the actor playing Dr. Rush (Robert Carlyle) was the same actor that played Begbie in the film Trainspotting.  I gotta tell you, the character of Begbie scared the crap out of me in that film, and to this day still scares me.  This realization made the Dr. Rush character that much more intense for me.

This 3-disc DVD set includes over 80 minutes of cool Extras, including:

This is a great show and this collection makes a nice DVD set to own.  Personally, I’d rather they produce a single-season set instead of two half-season sets, but I understand the economics behind it.  You can pick up Stargate Universe 1.5 on DVD or Blu-Ray at your local DVD retailer or online.  Kick back and enjoy these fantastic episodes as you prepare for the series return to Syfy on September 28, 2010.  My thanks to MGM Home Entertainment for sending me a copy to review.