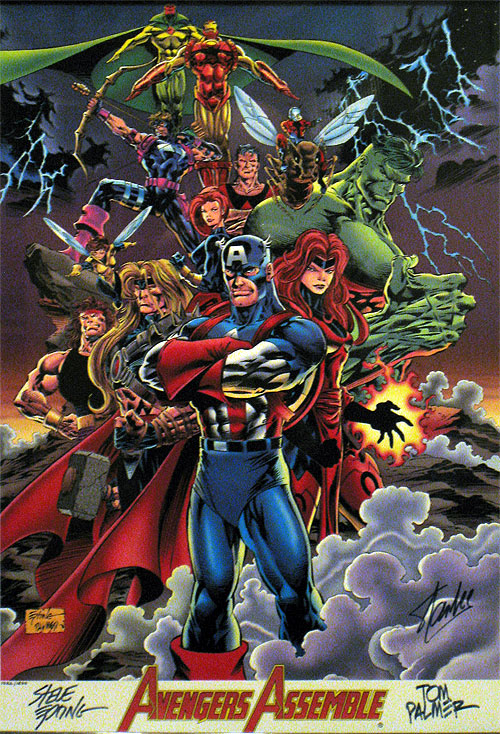 Apparently my love of the Avengers is broken.  I’ve been reading the Marvel comic Avengers faithfully since 1993, however, my favorite eras of the team are those reviled by long-time Avengers fans.

When I started reading the book, the classic line-up with Captain America, Iron Man, and Thor didn’t exist.  Sure I read the occasional issue of the Avengers growing up with the classic team, and of course there was Secret Wars.  But I truly fell in love with the team when the Avengers was composed of: Black Knight, Crystal, Sersi, Black Widow, Captain America, Hercules, and Vision.  Yup, that’s right.  I became a fan of the Avengers during the “Brown Jacket” era.  Bob Harras, The Gatherers, Force Works, Steve Epting, The Crossing, Bug Jan, Tom Palmer, Kang-controlled Tony Stark, followed by teenage Tony Stark, Warren Ellis’ Thor, Mike Deodato, Moonraker, and Timeslide.  Loved it.  All of it. Not many people look back on this era fondly, but I don’t agree with that sentiment.  At the time, Marvel was making some big changes to the Avengers team.  They were keeping the stories fresh, unpredictable, and preventing stagnation.  Whether you liked the changes or not, you should at least acknowledge that Marvel was trying to push the characters forward.

My other favorite era of Avengers is right now!  I’ve enjoyed the entire run of New Avengers, but around Civil War is when it really became “top of the stack” reading for me.  Sure the decompressed storytelling can be annoying at times, but overall the stories and characterization have been great.  Civil War, The Initiative, Secret Invasion, Dark Reign… love all of it!  And I’m looking forward to Siege. Some folks just can’t stand Brian Michael Bendis’ take on the Earth’s Mightiest Heroes.  Me, I love it.  As far as I’m concerned, Spider-Man and Luke Cage fall in the category of true Avengers nowadays.  I read just about all the Avengers-related titles and can’t get enough: New Avengers, Dark Avengers, Mighty Avengers, Avengers The Initiative, Ms Marvel, and Young Avengers.  Obviously I’m not in the minority about this era.  Clearly Marvel is selling enough copies to support four month Avengers titles and several mini-series.  I don’t think that has ever been the case before.

Also, I hate Thor.  Can’t stand him.  That’s another thing that makes me an unusual Avengers fan.  I realize he’s a “classic” Avenger.  I realize he’s uber-powerful.  I just don’t care.  When he shows up in an Avengers issue, I simply start to yawn.  The Thor/Asgard content is the only thing that’s got me concerned about Siege.  I’m worried after Siege, the Avengers roster will include Thor.  Ugh.