Workman Publishing has just released the amazingly cool DC Comics Super Heroes and Villains Fandex!  What a neat product!  I was skeptical when I first heard about it, but it’s far exceeded my expectations.  This handy field guide makes an excellent reference for both the DC Comics seasoned veteran as well as the comic book rookie.

So what’s a Fandex you ask?  A Fandex is actually called “Fandex Family Field Guide”. It is an approximately 10″ long stack of full-color, heavy stock, double-sided, die-cut cards.  They resemble bookmarks to some extent. This stack of cards is fastened together with a plastic bolt which serves as a pivot point.  This allows the cards to be fanned out so you can see the pictures at the top of each card and pick the one you would like to look at.  The top of each Fandex card has a large picture of the featured subject, and the card is cut around that particular shape. The cards state interesting information on each subject on both sides of the card.  Typically Fandex focuses on historical or factual subject matter (like famous painters or North American birds).  This particular one focuses on the heroes and villains of DC Comics.

Below is a shot of the Fandex spread out. Click to enlarge. 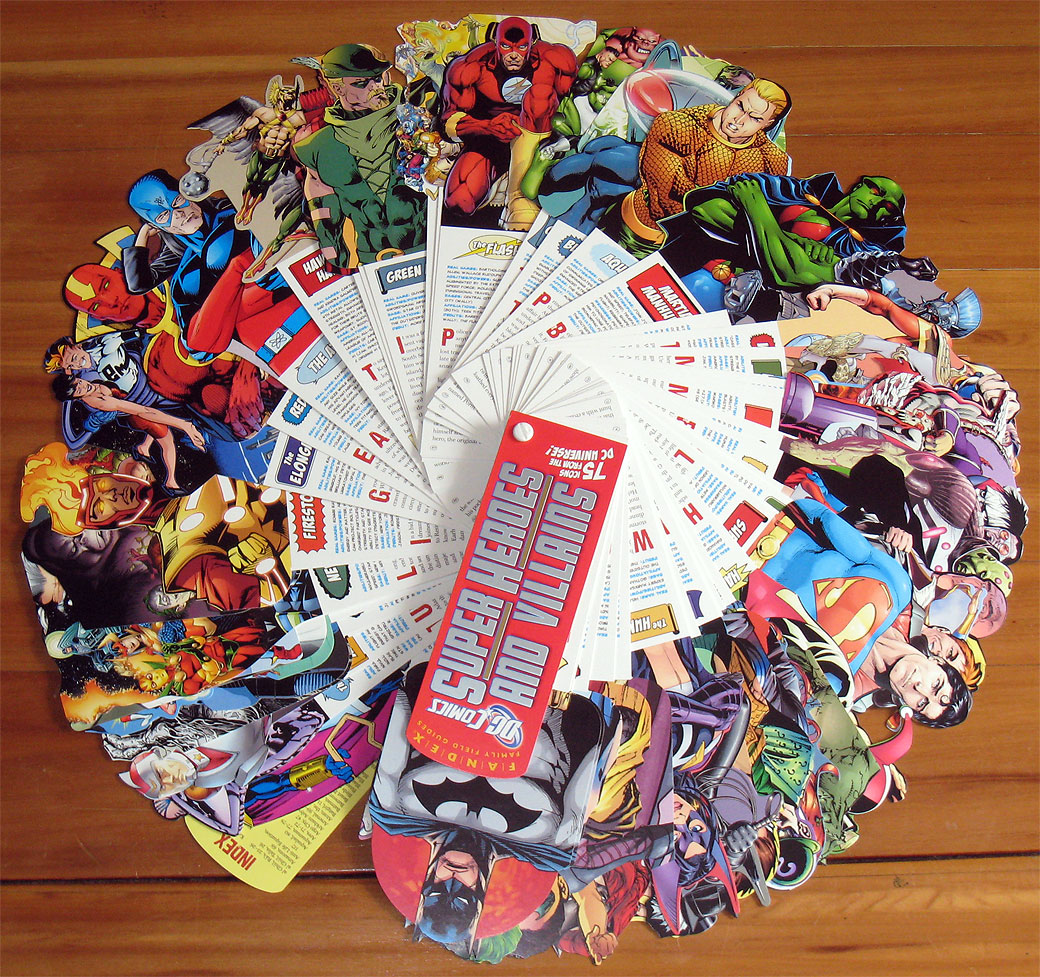 This field guide starts off with a pleasant introduction from Dan DiDio, Co-Publisher of DC Comics.  From there it jumps into the meat of the Fandex.  While the guide only contains 75 different entries, they’ve managed to squeeze in many more characters than that.  They accomplished this by listing teams and by combining heroic legacies onto a single card. For example, the Robin card covers the five different people to carry the mantle of Robin – Dick Grayson, Jason Todd, Tim Drake, Stephanie Brown, and Damian Wayne.

I really like the way they chose to order the characters.  Rather than the usual A-Z, they clumped together characters by which “family” they belong to.  The first batch of characters are all Batman-related (Batman, Batwoman, Scarecrow, Harley Quinn, etc), the second batch are all Superman-related (Superman, Lois Lane, Brainiac, General Zod, etc), and the third batch are all Wonder Woman-related (Wonder Woman, Hippolyta, Cheetah, Ares, etc).  Just those three “families” compose the first half of the Fandex.  The second half starts out with many of the remaining JLA members and their related characters, such as Aquaman and Black Manta.  Then they delve into the Fourth World, the JSA, the Marvel Family, the Legion of Super-heroes, the Teen Titans, some random characters, and ending with the Monitors.  All-in-all a very impressive roster of characters covered.  If you have a hard time finding your favorite character, there is an index in the back to help.

All the artwork is pre-existing from various comics, but they did an excellent job selecting some of the best – Gary Frank’s Superman, Brian Bolland’s Joker, Terry Dodson’s Wonder Woman, Art Adams’ Gorilla Grodd, George Perez’s Teen Titans, Tom Mandrake’s Martian Manhunter, Ethan Van Sciver’s Flash, Kevin Maguire’s Metal Men, and so on.  The content was meticulously researched by Randall Lotowycz.  I feel he did as good a job as the much-beloved Who’s Who series from the 1980s.  The information appears to be current through the conclusion of Final Crisis.  For example, Firestorm’s card doesn’t make any mention of the events that took place during Blackest Night.  … That’s right, Firestorm has his own entry!

Here is the promotional copy from the publisher:

Celebrate 75 years of DC Comics with an obsessive Fandex Deluxe: a supersized deck of 75 iconic heroes and villains whose power over the popular imagination has never been stronger (think The Dark Knight, last summer’s $1 billion blockbuster).

The gang’s all here: Batman, Robin, Superman, Wonder Woman, Aquaman, the Green Lantern, Captain Marvel, Justice League of America, the Flash. So are their nemeses—the Joker, Catwoman, Mr. Freeze, Lex Luthor, Cheetah, Brainiac, Poison Ivy, Deathstroke. Meticulously researched, with layers of information covering origins, biography, back-stories, affiliations, motivations, weaknesses, and fascinating trivia, the deck adds up to an insider’s history of the DC Universe. And what better way to present it than in the format with super powers—Fandex and its die-cut cards perfectly capture the characters in one dynamic pose after another, with the art taken straight from the pages of the original comics.

From the essential—learn about the Crisis on Infinite Earths—to the improbable—discover how Lex Luthor became President of the United States—to the offbeat—did you know that Clark Kent and Lois Lane lived in a building owned by Wayne (i.e., Batman) Enterprises: it’s a handheld feast for newcomers and passionate comics fans alike.

I highly recommend this product to anyone that’s ever taken an interest in DC Comics, Who’s Who, the DC Comics Encyclopedia, or any of DK’s Ultimate Guide books. This Fandex retails for $12.95 and is available online through many sources. My thanks to Workman Publishing for sending me a copy to review.