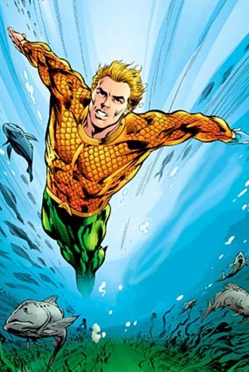 So my new pet theory is that Geoff Johns & Ethan Van Sciver will give Aquaman their “Rebirth” treatment within the next few years.  I’m going to put a target date of 2013 on it simply because there was four years between “Green Lantern: Rebirth” and “Flash: Rebirth”.  With “Flash: Rebirth” coming out in 2009, four years later would be 2013.  If you do a quick Google search on “Aquaman: Rebirth”, you’ll discover I’m not the only person that has come to this conclusion.   However, since I’m “Irredeemable”, I’m going to claim the theory to be completely mine.  🙂  Therefore, you heard it hear first… “Aquaman: Rebirth” shipping in 2013 by Geoff Johns & Ethan Van Sciver!

Believe it or not, I really think this series could happen.  First off, both Johns and Sciver has publicly admitted their interest in working on Aquaman (see article snippets below).  Second, if you look at the “Big Seven” characters from the Justice League, Aquaman is the next obvious choice for them to revamp.  The “Big Seven” consist of the following: Superman, Batman, Wonder Woman, Green Lantern, Flash, Aquaman, and Martian Manhunter.  For the “Big Three” (Superman, Batman, and Wonder Woman), they most likely won’t be receiving a “Rebirth” style make-over anytime soon.  They’re simply too established and currently moving forward.  Johns & Sciver have already tackled Green Lantern & Flash.  That just leaves Aquaman and Martian Manhunter.  Well… Martian Manhunter is currently dead.  I’m sure DC will bring him back at some point, but he doesn’t have the rich legacy-filled history that Johns typically likes to dive into.

Maybe I’m wrong here, goodness knows most of my theories don’t pan out, but I’m putting pixel to screen on this one.  So in 2013, you may hear me shout across the inter-web, “I told you so!”

Below are the snippets from various articles showing both Geoff Johns & Ethan Van Sciver’s interest in working on Aquaman.

Any other DC Characters that you’d really like to take a swing at?

Yeah, I’d like to work on Aquaman. But the only way I would do it is to take the original Aquaman and restore him. I’d want to re-present him in away that’s accessible to more fans. I really believe that all of these characters have a pure essence to them. You can go back and read the first ten issues of a character’s first appearance and then just use that [as a starting point]. If you’re going to do Batman then go back and read “Detective Comics” #27 on up for a little while and bring him back to his roots, for God’s sake.

The original intent of the creator is what I’m most interested in. So take Aquaman and just bring him back. Just straiten him out and untangle him. Give him to the audience as simply as possible and in a refined manner that people will find appealing.

And then, I always add a little touch of horror. There is always something a little scary about what I do. I believe in creepy, scary villains. I believe in dark shadows and really contrasting good and evil in my comics. Because I’m a DC Comics artist, I think that line is very definite in our books. So a character like Black Manta would be great. It would be an awful lot of fun to work on. I get shivers. I have goose-bumps right now just thinking about it. So I’d like to do an “Aquaman” book and work on our boy Arthur.

– Are we ever going to see the original Aquaman again?

At that point, Johns and Van Sciver began whispering, saying “can we say it?” Finally, Van Sciver stated, “We’d like you to refer to Blackest Night for the answer to that.”

A fan asked [Geoff] Johns what other DC books he wanted to write, with Johns rattling off a nearly-exhaustive look of titles, including “Mystery In Space” and “Aquaman”. “And he’s got proposals in for all of them,” joked DiDio.

Tell you what, I’ll meet you at the comic book shop on Wednesday in 2013 and we can buy our copies of “Aquaman: Rebirth” together.