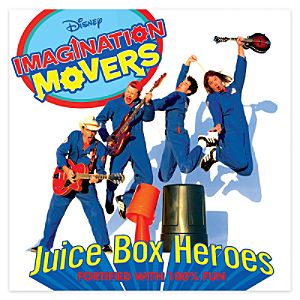 The first step is admitting you have a problem, right?  Hi, my name is the Irredeemable Shag and I’m addicted to a kid’s TV show.  I’m not talking about typical geek-accepted kids shows like, ‘Batman: The Animated Series’ or ‘Clone Wars’.  This is a full-on Disney kid’s show called Imagination Movers.   It’s part of their preschool programming block known as Playhouse Disney.

The show is about four musicians who run an “idea emergency” business out of a warehouse.  It has all the hallmarks of a kids show: musical numbers, thinking and teaching topics, cute puppet characters, etc.  I’ve seen dozens of these type shows over the years.  For some reason this one has captured my attention, especially the music. My whole family enjoys watching the show!  I even downloaded some of their songs to my iPod for the kids.  Really catchy tunes!  No, I don’t listen to the songs when I’m alone … at least not yet.

For me the Imagination Movers is a modern-day Monkees, but targeted at preschool kids.  One site described the show as, “What would happen if the Beastie Boys collaborated with Mr. Rogers?”  Now that’s not completely fair as only a few of their songs involve rap, most are up-beat rock type songs.  Each “mover” has their own quirks and props, they perform catchy musical numbers, they have adventures, and the show is fun in general.  I assumed that Disney had taken some musical guys, thrown them together, and created a show around it.  However, on Wikipedia it says these guys have actually been together since 2003, came from New Orleans, and have been performing stage shows for years.  They only signed with Disney in the last year or so.  It’s really amazing that they came up with these concepts themselves and put together such a great product!

If you’re a parent of a young child, I definitely recommend you check out the show.  If you’re not a parent, it may not be your thing, but you may still enjoy watching it with your nieces or nephews.  Me, I’m a lost cause.  I’m an addict.  I may have to turn in my “Geek Card”.