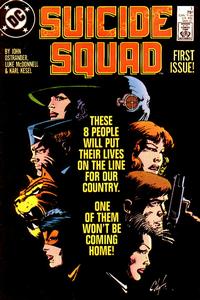 John Ostrander has written some of the greatest comics produced in the last 20 years. Some of his best known work includes: Suicide Squad, Star Wars Legacy, The Spectre, Legends, Grimjack, The Kents, Hawkworld, Martian Manhunter, Eternal Warrior, Magnus Robot Fighter, Manhunter, Firestorm, and the list goes on and on.

John has been battling glaucoma for years now.  If he loses this battle, he loses his eyesight.

John recently had some very expensive surgery.  Without the surgery, he would not have been able to retain his sight.  Unfortunately, the resulting medical bills are more than John can afford.  This is where we come in…

A benefit auction has been announced to raise money to pay the medical expenses of John Ostrander.  His friends and colleagues Mike Gold, Adriane Nash and Peter Katz have organized the benefit auction with the aid of Wizard Entertainment to help pay the medical bills after John’s insurance ran out. The event will take place on the Saturday night (August 9) of Wizard World Chicago Comic-Con in a nearby hotel.  If the auction isn’t an option for you, they are taking donations as well.

John continues to give us excellent comic book adventures.  This is your chance to give something back to him.  I feel this is important enough that I’m posting it both here on ONCE UPON A GEEK and on my other blog, FIRESTORM FAN.

Please visit Comix4Sight.com for all the details and how to help.  Anything you can give would be appreciated.