Presenting comic book advertisements for the 1980 Saturday morning cartoons!  Here we have ads from ABC, NBC, and CBS. 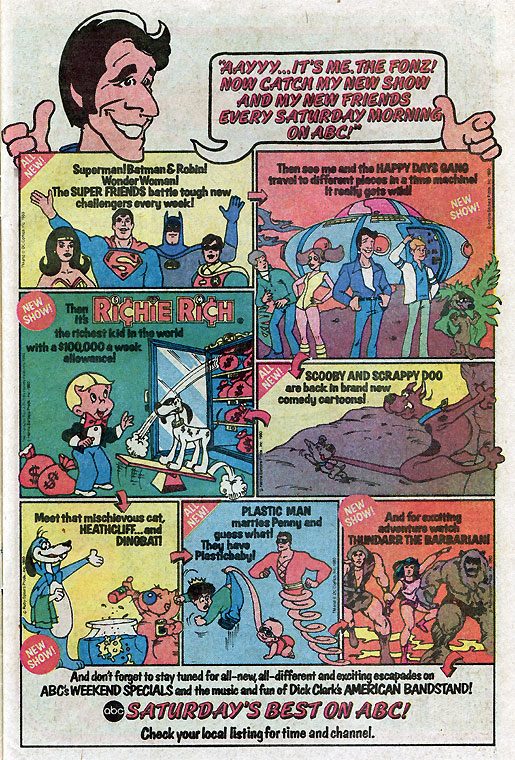 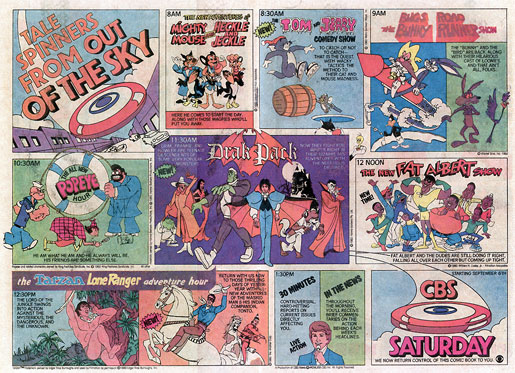 If I had to declare a winner for me personally in 1980, I guess it would have been ABC.  I was a big fan of Super Friends and Thundarr the Barbarian, and a moderate fan of Plastic Man and Happy Days Gang.  Conversely, Scooby-Doo had pretty much buried itself with Scrappy-Doo and no longer held any interest for me.  I’d say NBC was close on the heels of ABC in 1980 with winners like Godzilla/Dinomutt Hour, Space Ghost and Herculoids.  About the only time I’d switch over to watch CBS in 1980 was for Drak Pack and the Tarzan/Lone Ranger Adventure Hour. Interesting that NBC had Daffy Duck and CBS had the Bugs Bunny/Road Runner Show.  I didn’t realize they split the Looney Toons characters up for these purposes.

I have fond memories as a child watching shows like Looney Toons, Scooby-Doo, Popeye, and Tom & Jerry.  Yet I watched them on weekday afternoons rather than Saturday mornings.  For me, Saturday morning cartoons were reserved for new and exciting adventures, not cartoons I could watch any day after school.  I guess I was a bit of a Saturday morning snob.