I recently had another opportunity to interview Gerry Conway, comics and TV legend!  This time Michael Bailey (from the Views from the Longbox podcast) and I interviewed Gerry together.  Gerry was extraordinarily generous with his time sitting down with us for about two hours.  What a great guy!  Previously I interviewed Gerry about Firestorm, a comic character he co-created with Al Milgrom.   This time we tackled his entire comics and TV career, yet only scratched the surface of his body of work. 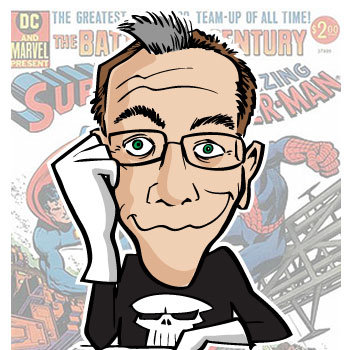 Gerry Conway was one of the most prolific comic book writers of the 1970s and 80s.  His writing credits go on for miles! He’s probably best known for co-creating the Punisher and Firestorm, as well as scripting the death of Gwen Stacy in the Amazing Spider-Man.  He also wrote for and produced such TV series as Law & Order and Diagnosis Murder.  Gerry recently returned to comics after an almost 20 year absence with the insightful mini-series, The Last Days of Animal Man.

As always, Gerry was a true joy to talk with. During our two hours together, we discussed how Gerry started in comics, his work on Firestorm, Steel: The Indestructible Man, Justice League Detroit, the Superman vs. The Amazing Spider-Man crossover, Iron Man, DC during the Explosion and Implosion and much, much more.  We even get to talk some Law and Order: Criminal Intent.

Be sure to head over to VIEWS FROM THE LONGBOX.com and listen to our interview with comic book legend Gerry Conway.  Thanks for stopping by and I hope you enjoy the interview. To keep up with Gerry, be sure to check him out on Twitter and Facebook.

One thought on “Gerry Conway Interview on Comics and TV Career”