Had an absolutely great time on Free Comic Book Day over the weekend! My kids and I hit three different shops to see what each store was doing.  One shop featured face painting and a woman dressed as Wonder Woman.  Another store offered face painting and extra free comics to kids dressed in costume.  But I’d have to say I was most impressed with my regular shop, COSMIC CAT.  Not only did they have the most diverse selection of free comics, they also had local comic creator signings, Star Wars character appearances from the 501st Legion and Rebel Legion, and original comic pages displayed as art in their gallery.

My kids get really excited about Free Comic Book Day; it’s like a national holiday to them.  They talk about it for weeks leading up to the date and plan out their costume, as if it were Halloween.  My four year old daughter has outgrown her Supergirl costume, so she used elements to create her own Supergirl costume.  She wore the belt and cape along with a red shirt and frilly white skirt.  So cute!  My 10 year old step-son was very creative and pulled together his own Black Lantern costume.  He decided to bring his scythe, not knowing that was Nekron’s weapon of choice – watch out Geoff Johns, this kid has you figured out!  You can see him below along with some of the Star Wars characters that appeared at Cosmic Cat. 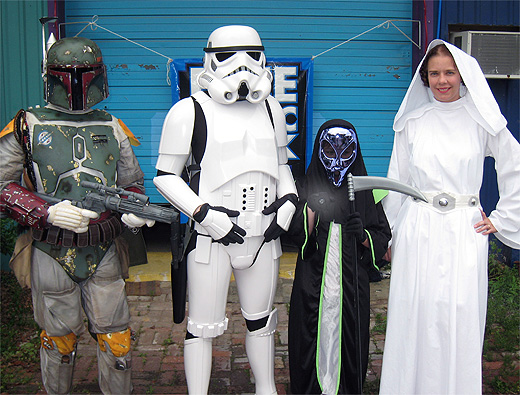 We ran into lots of old friends at the different shops and generally had a great time.  Also picked up some great-looking free comics.  Can’t wait to read them!  See you at Free Comic Book Day 2011!