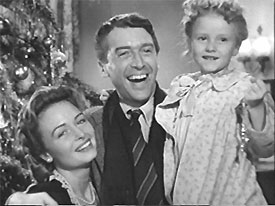 This year I decided the whole family should watch It’s a Wonderful Life together.  I was the only one in the family that had seen the movie before.  As far as I’m concerned, this is one of the greatest holiday and “feel good” movies ever made. If you’ve never seen it, be sure to watch it this holiday season.  It’s not short and it seems slow the first time through, but all the events in the early portion of the movie really pay off at the end.  I tell ya, I shed some man-tears at the film’s climax every time when the town comes together to help George Bailey.

How did my family enjoy it?  Well… my two and a half year old daughter was asleep within 20 minutes, my wife lasted about 1 hour and 20 minutes, but my nine year old step-son made it the whole way though.  Overall I think he really enjoyed the movie.  I had to explain/recap some as we went along because kids at that age don’t really listen to dialogue for major plot points.  However, the acting and direction of the movie was clear enough that he understood most of what was going on.  When the film first started, he sort of freaked out that it was in black-and-white.  To him that format equals instant boredom.  However, I think the opening scenes kept his interest because they started out with George Bailey as a kid (it was easier for my step-son to relate to another kid). 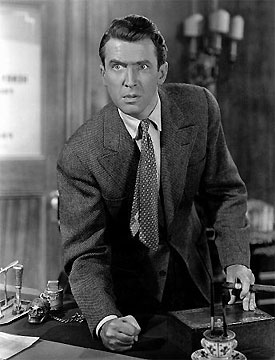 Years ago I picked up an unedited black-and-white copy of the movie upon the recommendation of my old friend Serv.  He said forget all that colorized nonsense and watch it in the original form.  He was right.  You really get so much more out of the black-and-white version.

Watching the film again, I was really impressed with what a good job Frank Capra did directing this film. The direction really shines when everything goes wrong for George.  The changes in the music, lighting, motion, and acting really stand out. It’s almost as if it’s a completely different movie.  This movie was  released in 1947 and 41 years later it’s still captivating!

Jimmy Stewart is an amazing actor.  He was absolutely brilliant.  He’s such a likable character in the beginning, and then his intensity later was enough to scare my step-son.  Some of those shots of his wild eyes are just awesome.

When the movie was over, the first thing my step-son said was, “What about Mr. Potter?  He got away with the money and he still owns everything.”  I thought that was pretty perceptive of him.  They never really address the issue that Mr. Potter caused all this havoc in George’s life and got away scott-free.  Several years ago, Saturday Night Live realized the same thing and performed the “Lost Ending” to It’s a Wonderful Life…

Click here if you can’t view the embedded video

I love that skit.  Everything is funnier with violence.  🙂

And if you’re wondering how this movie qualifies to be featured on a geek-related blog…  The policeman and the cab driver are named “Bert” and “Ernie”.  There were rumors that supposedly Jim Henson got the names for those famous Sesame Street Muppets from this movie.  However, nowadays the party line is that it was a coincidence.  My opinion?  Henson got the names from It’s a Wonderful Life, but the current Henson Company doesn’t want to risk a lawsuit.  There’s your Six Degrees of Geek Separation.

If that’s not enough geek for you then check out these Star Trek Bloopers.  Watch for Brent Spiner’s Jimmy Stewart impersonation around the 1 minute mark.  🙂

Click here if you can’t view the embedded video